Untouched by the modern world, in the lap of unadulterated nature Ganesh Himal stands at the 7406m from the sea level. Ganesh is a Hindu deity that has elephant head and human body, the deity which is worshipped first before worshipping other deities as the south face of the mountain Ganesh IV, resembles Lord Ganesh.  First climbed on October 6th in 1955, by Franco-Swish expedition team, Ganesh Himal Trekking offers an exclusive view of Lamjung (6800m), Fishtail(6990m), Manaslu (8163m), Annaurna (8081m) and Himchuli (7893m). In addition, home stay in Tamang villages can be another plus point of the trail. Suitable for those who seek off the beaten track, Ganesh Himal Trekking has no other alternative. A huge store for 526 species of plants and 300 species of birds, Ganesh Himal Region is averagely challenging and technical trail. Fir, pine, oak, rhododendron , Artemisia, cordyceps and other plants that collude with musk deer, Himalayan tahr, pika, Himalayan goat, Pheasant, hare, red panda et cetera have beautified the trail. Stronghold of mixed ethnic groups Tamangs, Gurungs and Brahmin, the trail is exceptionally unadulterated and perfect for alpine hiking in the far flung area from the city hustle and bustle.

Himalayan Wild Treks Pvt. Ltd is one of the most trusted trekking agencies in Nepal with a group of the governmentally experts and veterans. Please contact count on us because we ensure you the safe and successful trekking for Ganesh Himal Trekking– 22 Days.

Highlights of Ganesh Himal Trekking – 22 Days
The sightseeing of the major UNESCO World Heritage Sites before scenic drive to Khahare Bazar is phenomenal.  While passing by temples and monasteries warm hospitality of Tamang ethnic groups makes travelers fee at home. The dense forest zones festooned with vast range of biodiversity on the off the beaten trail in Dhadiing and Gorkha border zone. Ganesh Himal symbolizes the phenomenal Hindu deity Ganesh. The snow-capped mountains and peaks over the lush hills and serrated landscapes enthralls every heart. The sightseeing of Ganesh Himal Range, Manaslu, Lantang and Annapurna South including Tibetan terrain. The trail that leads travelers through least trodden areas of the Himalayan segments makes the trail.

#Ganesh Himal Trekking Difficulty
Ganesh Himal Trekking has been graded as one of the most strenuous trekkings in Nepal. The  intensity of difficulty is directly related with your physical fitness, prior hiking experiences and the topography of the terrain where you are trekking. Mostly, Ganesh Himal consists of high terrains that involves having to walk continously for about six to seven hours over three thousand meters from the sea level. Being off the beaten land, Ganesh Himal is mostly untouched trekking site in Nepal. Its remoteness, exotic landscape, trails with innumerable ups and downs makes the trail challengin as well as adventurous.

#Ganesh Himal Trekking Best Season
Ganesh Himal Trekking is doable all round the year. The seasons are classifed into four category:Spring, Autumn, Winter and Summer. In the spring season, travelers are welcomed with rhododendron and magnolia flowers on the trail. Autumn season is known for its moderate temperature, which means it is neither too cold nor too hot in the Autumn Season. Even the sky remains crystal clear allowing you to cherish the mountain views. For more challenges and adventure, you might want to pick out winter, the coldest of the seasons. Morning and Evening temperatures drop below zero which is why it is mostly avoided. Summer tends to be rainy as well as cloudy.

#Ganesh Himal Physical Fitness
Physical Fitness is a must for any trekking. The fitter you are the higher your chances of joy. If you are unfit, obse or overweight, chances are that you might face the hostilites like altitude sickness, fatigue and headache.Therefore the level of fun or recreation hinges on how preapred physically you are. Walking on the altitude trail over three thousand meters demands you to adjust to the atmosphere where there is less oxygen. In addition to that, you will be required to hike on the passes, which in itself is physically strenous. Swimming, short hiking, cycling, walking and other activities prior to the trekking will prove to be instrumental.

#Ganesh Himal:How to Reach
Ganesh Himal Trekking starts with a brief sightseeing of the major UNESCO World Heritage Sites in Kathmandu prior to a scenic drive to Khare. From Khare the trekking traverses into Kimtang Bensi,which is a famous tourist site en route to Chapachet, Sherthung, Chhumlo Bhanjyang and Seto Daha, from where we have an excusrsion to Dipu Peak. Then moving ahead, we go to Uagnjo traversing into Tippling, Pangsang Kharka, Lek Camp, Samdang, and Parvati Kunda, finally arriving at Shyabrubeshi, a famous tourist hub from where we drive back to Kathmandu that puts an end to the trekking to Gahesh Himal.

#Rolwaling Valley Trekking Difficulty
Rolwaling Valley Trekking proves to be difficult in the lack of physical fitness and background climbing experiences. The difficulty may raise if you are obese and are prone to altitude sickness. Most of the trail consists of uneven trail with innumerable ups and downs where you will have to painstalkingly walk. As you ascend, the oxygen level gets thinner causing complexity in breathing. You will need to adapt to the newer climatic zone that requires acclimatization. Walking six to seven hours a day is considered normal. You will need physical stamina to go through the technical and geographical difficulty.

#Rolwaling Valley Trekking Best Season
Autumn and Spring are the best seasons for the Rolwaling Valley Trekking. As Autumn and Spring are the two trekking seasons in Nepal that are most frequented by the tourists the world over. Spring has earned reputation for the blossoms of the flower. Autumn is second best season other than the Spring. For the clearest weather and the most peaceful atmosphere, tourists the world across easily fall for Autumn. Unless you are an intrepid trekker who is not finicky about the weather hostilities, you can always do Rolwaling Valley Trekking all year round. Winter and Summer are not as friendly as Spring and Autumn.

#Rolwaling Valley Trekking Physical Fitness
It is important that you are physically fit to do any trekking in Nepal or elsewhere around the world. Physical fitness is one of the most salient essentials for trekking. You are not expected to be super fit like fitness connoisseurs or fitness fanatics but you have to feel comfortable about your weight and size of the body because walking on the uneven terrain can prove to be excessively strenuous if you are obese or overweight. For the fitness consider morning walk, swimming, cycling or rock climbing prior to the actual commencement of Rolwaling Valley trek. Keep in mind that you can avoid altitude sickness keeping yourself in a good physical shape.

Included in the Cost

✅Airport pickups and drops in a private vehicle
✅3-star hotel accommodation in Kathmandu with breakfast
✅Teahouse accommodation during the trek
✅All meals (breakfast, lunch and dinner) during the trek
✅Welcome and farewell dinners
✅All ground transportation on a comfortable private vehicle as per the itinerary
✅Guided city tour in Kathmandu by private vehicle
✅Entrance fees for sightseeing/monument visits as per the itinerary
✅An experienced, English-speaking and government-licensed trek leader and assistant trek leader (4 trekkers: 1 assistant guide)
✅Porter service (2 trekkers: 1 porter)
✅Staff costs including their salary, insurance, equipment, domestic airfare, food and accommodation
✅Himalayan Wild Treks trekking bag/duffel bag, t-shirt and trekking map are yours to take
✅All necessary paperwork and trekking permits (National Park Permit, TIMS)
✅Medical kit (carried by your trek leader)
✅All government and local taxes

The following checklist should help you with your packing. As a general rule, you should always try to keep the weight of your equipment to a minimum. The packed weight of your trek bag while trekking should be no more than 15 KG.

Note: Walking pole, down jacket, sleeping bag, etc available on hire in Kathmandu or request we will provide it. NOTES Trip cost will vary depending on numbers of travelers, duration/days of trek, standard of hotel in Kathmandu before & after the trip. Please contact us to GET a Custom Quote. 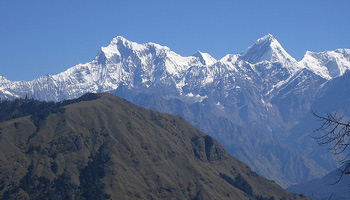