Island Peak (Imja Tse) Climbing (6189m), offers two options: Either they can start the ascent from the Base Camp (5000m ) or from the High Camp (5087m). The  commencement from the High Camp might reduce the length but water availability at the Base Camp indicates it is the better starting point. The ascent begins from a sandy and grassy trails studded with boulders before a snowy glacier, the complicated segment, opens up. The several crevasses make the glacial segment complicated as well as tricky for the mountaineers where newly fixed strong rope and highly professional and experienced licensed mountain guides provide surest sense of complete safety. The most essentially fundamental skills to be able to use the climbing equipments introduced  during the trial session prior to actual climb is mandatory. Defined as an extension of South Ridge of Lhotse (8,516m.)

Island peak (Imja Tse) Climbing (6189m) offers an exotic view of Nuptse (7879m), Lhotse (8501m), Makalu (8475m), Baruntse (7129m), Ama Dablam (6812m), Pumori (7161m), Kwongde (6187m) and Mt.Everest (8848m), this peak was used as a training peak by Sir Edmund Hillary back in 1953 that was when a mountaineers’ team comprising of Tenjing Norgay, Charles Evans, Charles Wylie, and Alf Gregory with seven other Sherpas set the record as the first mountaineers to step on the peak that has been proved to be contributory for the novices and professionals aiming to climb higher peaks and mountains in Khumbu Region Nepal or elsewhere.

Island Peak (Imja Tse) Climbing (6189m), Locally known as Imja Tse (6189m.), a mountaineer Eric Shipton in 1952 coined Island Peak, for its resemblance with an island of a colossus snow mass. For the fact the top part is strenuous and challenging as it is glacial ridge with sporadic crevasses, the basic mountain climbing skills and experience is always instrumental. Island Peak climbing being in the area of Sagarmatha National Park, it offers a wide range of rarest  alpine flora and fauna. Snow leopards, black bear, musk deer, ghoral, Himalayan thar, wolves, pika, pheasant, snow cock, jackals, wolves, and Asian monkeys rarest of the plants like Artemisia, Paris Polyphilla, Cordyseps and Swertia can be found on the trail that winds through the alpine forests and terrains. The temperature In Island Peak falls below 0oC and intermittent snowfall is common. The best times for the peak climbing is between March to May, June to September and October to November while considering the time in favor of clients is the major priority in Himalayan Wild Treks.

Short Brief of Island Peak (6189m). Trail
The journey to Island Peak Climbing -30 Days starts from Kathmandu with a brief sightseeing of the major UNESCO World Heritage Sites in Kathmandu (1400m) prior to a flight to Tenjing Norgay Airport at Lukla (2860m) from where the trail winds through Namche (3440m), a Sherpa settlement known widely as the Gateway to Mt. Everest (8848m), the world’s highest mountain. Continuing forth, the trail then moves to Tengboche (3870m), Pheriche (4200m), Lobuche (4930m), Gorak Sep (5170m), Kala Patthar (5545m), Chhukung (4730m), and Island Peak Base Camp (5000m) where a brief pre-climb training will be conducted before climbing Island Peak (6189m). After the ascent of Island Peak, the mountaineers traces through Pangboche (3985m), and Namche (3440m) en route to Lukla (2860m), where the trekking formally ends.

Himalayan Wild Treks Pvt. Ltd is one of the prominent trekking agencies in Nepal with group of experienced and committed professionals. Do grant us opportunity to be a mediator in your life time adventure for Island Peak Climbing (6189m)- 24 Days.

#Island Peak (Imja Tse (6189m.) Highlights
Island Peak is the highest peak in Nepal- located in Sagarmatha National Park, which is a huge storehouse for rarest of the  alpine flora and fauna in the world. Mera Peak starts with a sightseeing of the major UNESCO World Heritage Sites in Kahthmandu from where a scenic flight to Tenzing Hillary Airport at Lukla opens a door to Namche, a famous Sherpa settlement and the Gateway to Everest. Rhododendron forest, including, fir, pine, poplar, hemlock, juniper, blue pine and different species of plants and animals like snow leopard, pheasant, black bear, red panda, snow wolf, Himalayan Thar, Jackal, musk deer, Asian monkeys et cetera are often spotted on the trail. Having its actual name Imja Tse, while seen from Tenboche, it looks like an island of snow, therefore it has been called Island Peak from the top of which the mountaineers can view Lhotse, Nuptse, Ama Dablam, and Cho Oyu with crystal clarity.

#Island Peak Climbing difficulties
Graded as Alpine PD+, Island Peak Climbing is technically mediocre. Island Peak is the most popular of all the peaks in Nepal for the fact any novice with short coaching and experienced mountaineer can easily climb this peak. Mildly strenuous the Peak requires physical fitness and basic knowledge of crampon, rope and axe skills. The ascent of the  elevation of the peak 6189m requires mountaineers to be well prepared for the structural complexity of the peak. Nepal Mountaineering Association(NMA) has categorized Island Peak Climbing as Group B- Climbing Peak. It is categorized as an average Peak in terms of difficulty which is not a  stroll in the park though. Himalayan Wild Treks provides full-fledged back-up to any novice or expert climber regarding conquering the summit of Island Peak (6189m).

#Island Peak Climbing (6189m): Best Season
The best recommendable season for Island Peak Climbing (6189m). is March to the beginning of June of Spring and September to November of Autumn. There are instances in which  mountaineers have successfully climbed Island Peak even in the times not recommended. However, taking the weather condition and visibility under consideration Himalayan Wild Treks would not recommend other times besides Autumn and Spring season. Monsoon is rainy and the mass of clouds hovering all day long inhibits the visibility of the views. And winter season would not be recommendable for the frigid weather creates inconvenience to the ascent and on the trail. Experienced mountaineers are capable of climbing the peak despite its weather  and seasons factors and with a short coaching  Himalyan Wild Treks provides, even novices can successfully climb this peak.

#Island Peak (6061m) Climbing Permit Cost and Fees
There are altogether thirty three peaks in Nepal, termed as Trekking Peaks  operated under the tutelage of Nepal Mountaineering Association (NMA). Following is the Island Peak climbing permit cost regulated by NMA. Island Peak is (6160m) considered as one of the technically demanding trekking peaks in Nepal.

The spring season, as compared to other seasons is slightly more expensive for a number of reasons: This is the best season as it offers the best weather with crystal clarity of the peaks and view and therefore it is the most favored and demanded season by the mountaineers. Secondly, Autumn is regarded as mildly propitious season while winter is excessively cold and summer often hinders the visibility caused by lasting clouds and intermittent rain.

#Island Peak Wearther and climate
When it comes to climbing Isand  Peak (6189m). during winter, the frigidity increases and the temperature even in daytime can plummet to below -0oC causing the climbing complicated  and that, due to its wintry hostility, indicates to look for other  propitious seasons like spring and autumn alternatively. December and January therefore are comparatively less propitious months for Island Peak climbing due to the excessive drop of temperature. July, August and September are disproportionately rainy that may bring impediments from mild to substantial ones. Most of the days during these months  remain cloud-capped that forbids  the view and clarity on the trail.

#Island Peak (Imja Tse- (6189m). Physical Fitness
One of the major concerns while climbing Island Peak is physical fitness. Since the ascent is not a stroll in the park, it obviously demands a certain level of physical fitness. Island Peak is PD+ graded trekking peak which means the peak is mild in nature with regards to difficulty. Physically novices with a brief climbing coaching with a session of practical as well as experienced mountaineers find the ascent joyful as the peak is classified as a non-technical climbing peak. Being physically fit is the fundamental requirement; however, ample acclimatization mandatory to adapt to the altitude must not be skipped. Along with physically fitness and preparation, mental preparedness holds equally important value when it comes to climbing Island Peak (Imja Tse) 6189m.

Included in the Cost

✖ Nepalese visa fee (bring accurate USD cash and two passport photographs)
✖ International airfare to and from Kathmandu
✖ Excess baggage charges (if you have more than 15 kg luggage, cargo charge is around $1.5 per kg)
✖ Extra night accommodation in Kathmandu because of early arrival, late departure, early return from mountain (due to any reason) than the scheduled itinerary
✖ Altitude chamber (PAC) or oxygen
✖ Lunch and evening meals in Kathmandu (and also in the case of early return from mountain than the scheduled itinerary)
✖ Travel and rescue insurance
✖ Personal expenses (phone calls, internet, laundry, bar bills, battery recharge, extra porters, bottle or boiled water, shower, etc.)
✖ Personal climbing equipment
✖ Personal climbing guide if requested
✖ Optional trips and sightseeing if extended
✖ Tips for guides and porters
✖ Services not listed in the ‘What Is Included’ section

The following checklist should help you with your packing. As a general rule, you should always try to keep the weight of your equipment to a minimum. The packed weight of your trek bag while trekking should be no more than 15 KG.

In addition to the items mentioned above for trekking, the following is a list of the additional specialized items which are required for the trekking peaks.
Plastic or leather mountaineering boots, with gaiters and crampons that have been tested for a good fit.
Fleece trousers or silhouette
Additional mites and gloves suitable for climbing
Ice axe, and ski poles (note - ice axes can be rented in Kathmandu)
Climbing helmet
Alpine climbing harness.
2 x tape slings
2 x screw gate karabiners
Descender / abseil device
Ascender

Note: Walking pole, down jacket, sleeping bag, etc available on hire in Kathmandu or request we will provide it. NOTES Trip cost will vary depending on numbers of travelers, duration/days of trek, standard of hotel in Kathmandu before & after the trip. Please contact us to GET a Custom Quote. 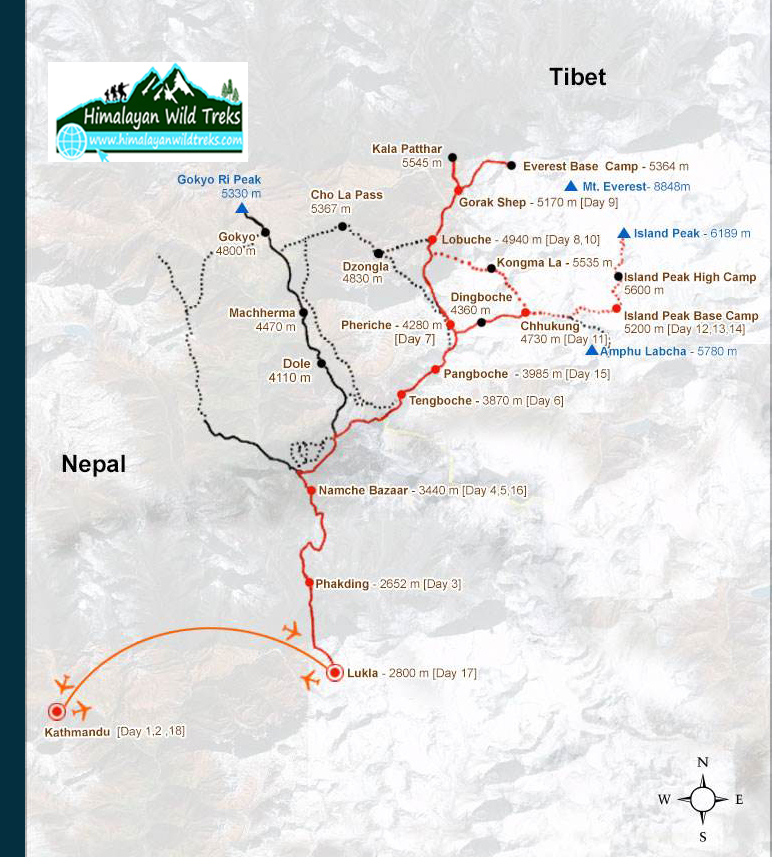