Tour 1
Day 1 – The tour starts with a sightseeing of Swayambhunath Stupa, a Buddhist shrine on the hilltop that overlooks Kathmandu Valley. Swayambhunath is also known as ‘the monkey temple’ because troops of monkeys can be spotted here frolicking with their amusing activities. Thereafter, we visit Kathmandu Durbar Square to see the 17th century built pagoda styled temples and shrines. Then we will visit Boudha, the largest Buddhist Stupa in Nepal which offers interesting souvenir shops along with Tibetan and Sherpa culture in the area. Lastly, we will visit Pashupatinath Temple, the biggest Hindu temple in Nepal, where the funeral activities of Hindu in Bagmati river bank and burial activities of non-Hindu people in the forested areas can be  observed. After the three UNESCO World Heritage Sites: Swayambhunath, Boudhanath,and Pashupati Temple are visited, we will drive back to hotel.

Day 2–  We will visit Patan Durbar Square which is dotted around with several Hindu temples like Krishna Temple built in Shikhara style. Stone carvings and images of deities here are worth seeing. Then we will drive to Bhaktapur Durbar Square that offers  the sightings of centuries old  ancient art and craftsmanship of Newari architects. Bhaktapur is also famous for temples built in pagoda and shikhara styles. The last destination of the tour this day is Changunaryan Temple, which is a temple dedicated to a Hindu God the Lord Vishnu. The famous temple Changunaryan is located at the hilltop of Bhaktapur. After the visit of these three UNESCO World Heritage Sites, we will drive back to hotel.

Day 1: On this day, we shall visit Panauti , which is ancient Newari City dotted around with Hindu temples. Panauti used to be ancient trading capital where the antique mansions and buildings can be seen and many of them are renovated by French government. Then we visit Namobuddha , one of the most celebrated pilgrimage sites in Nepal , which is about two hours drive from Kathmandu. Located at 2560 m, Namobuddha is known for its monasteries and peaceful ambiance in the Namobuddha Area. After that we  drive to Dhulikhel, a beautiful hillside that offers the panoramic views including the majestic mountain views.

Day 2: The tour starts with a sightseeing of Bhaktapur Durbar Square which unveils the ancient art and cultural reflection of Newari people in the past. Bhaktapur is one of the most sought after trekking destinations that offers the sighting of many several famous temples built in pagoda and Shikharya styles. Then we will head to  Pashupatinath Temple which is the greatest temple of Hinduists in Nepal. The funeral activities take place in the Bagmati river that flows by the river. Even the monkeys can be spotted in the jungle area that intersects with the temple. Thereafter, we will visit Boudhanath Stupa, the biggest Buddhist stupa in Asia. Once, we are done visiting these famous UNESCO Heritage Sites, we will drive back to hotel.

Day 1 : The trekking starts with a visit to Swayambhunath, also known as the Monkey Temple as there are monkeys seen frolicking in the jungle areas. Swayambhunath is a Buddhist stupa on the hilltop of Kathmandu Valley, which allows 360 degree view of Kathmandu Valley. Then we visit Patan Durbar Square that is filled with many Hindu temples including world famous stone-made Krishna Temple built in Shikhara Style. The stone carvings of the images here are worth observing.  After that we will either visit Changunaryan Temple or Nagarkot hill for the fresh tranquil air and stunning mountain views.
Day 2 :  We will visit Bhaktapur Durbar Square, one of the best sites for archaeological heritage sites associated with Newari People at Bhakapur. Bhaktapur is rich in ancient temples built in pagoda and shikhara styles. Then we will drive to Pashupatinath, the most sacred and biggest Hindu temple in Nepal. The temple is holy pilgrimage site for Hinduists as well as non-Hinduists. Thereafter, we drive to Boudhanath, the greatest Buddhist religious site in Nepal. Having done the sightseeing of all of the three UNESCO World Heritage Sites, we will drive back to hotel.

Day 1 : We start the day with a visit to Dakshinkali, a famous temple, where animal sacrifices take place under a deep seated cultural belife that the act of animal sacrifice will bring good fortune and well being of the family. After that we visit Kirtipur, for the sighting of impressive medieval temples along with the warm hospitality of Newari people there. Then we will visit Bungmati , where a short visit to Machhindranath temple, built in Shikhara style will give us rejunvenating experience. After, eyeful view of these spectacular places, we will drive back to hotel.

Day 2: We start the tour with Swayambhunath sightseeing. Swayambhunath Shrine overlooks Kathmandu Valley from a hilltop which is surrounded by a dense forest that gives shelter to monkeys, which is why Swayambhunath is called also 'the monkey temple.' We shall also pay a visit to Kathmandu Durbar Square that gives a spectacuar view of pagoda and shikhara styled temples which were built in 17th century. A short visiti to Boudhanath will give us insight to the largest Buddhist stupa in Asia built in 14th century. Then we shall visit Pashupatinath Temple, the largest Hindu temple in Nepal before we drive back to hotel.

Day 3: The tour starts with a sightseeing of Patan Durbar Square that gives a spectacular exporsure to shikhara and pagoda temples that embody Hindu religion and tradtion. Then we visit Bhaktapur Durbar Square which is one of the best tourist site for architectural heritages associated with Newari People. Thereafter , we shall visit Changunaryan Temple dedicated to Hindu God , the Lord Vishnu to see the incredibly aesthetic wood and stone carvings in the temple.  Once the sightseeing is over, we will drive back to hotel. 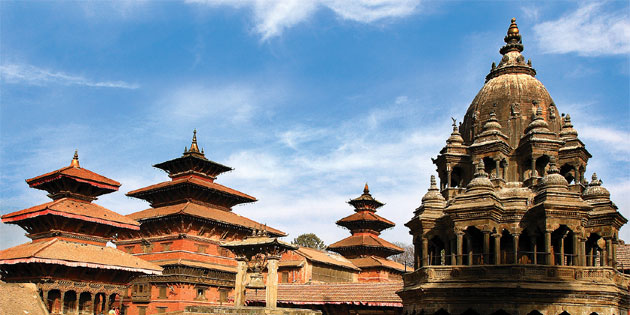 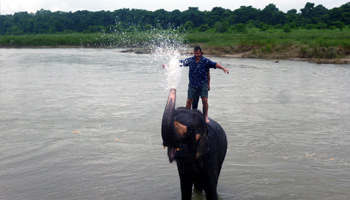 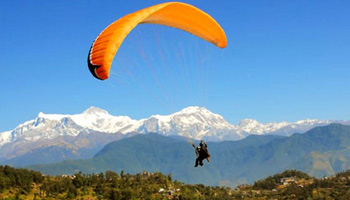